Hey guys! I’m so excited to be part of something super special this week! Today I get to share a book review from the amazing Mary Weber! Reclaiming Shilo Snow is my favorite book from Mary Weber to date, so being a part of this blog tour makes it extra special. Read on for the book review AND to join in on the Scavenger Hunt! 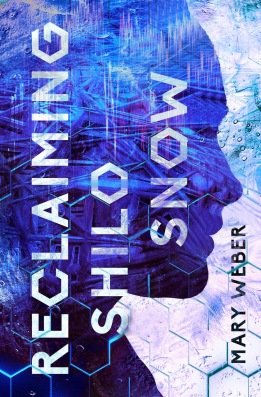 She was far more capable than Earth’s leaders had accounted for—and they had no idea what she’d do next.


Known as a brilliant mind that could hack humanity’s darkest secrets, seventeen-year-old Sofi Snow is the most wanted teenager alive. She found her way to the icy, technologically brilliant planet of Delon to find Shilo, the brother everyone but Sofi believes is dead.


But as she and Ambassador Miguel partner to find her brother and warn those on Earth of Delon’s dark designs on humanity, Sofi’s memories threaten to overtake her, distorting everything she holds true. She knows the Delonese kept her in a dark, deceptive place . . . and destroyed a portion of her life. Now, the more they discover of Sofi’s past, the more Sofi feels herself unraveling—as each new revelation has her questioning the very existence of reality.


In this harrowing sequel to The Evaporation of Sofi Snow, Sofi and Miguel must trust each other and discover the secrets locked inside Sofi’s mind as the line between what’s real and what they imagine begins to slip away . . . threatening to take humanity with it.

**I will make this review as spoiler-free as possible but you should read book 1 first!**

Reclaiming Shilo Snow surpassed all my expectations. When I finished The Evaporation of Sofi Snow, I thought I had a clear idea of where the story was headed. But I am happy to announce I was wrong! Mary Weber made this story so much more than I could’ve imagined.

The story picks up right where it left off at the end of book 1. As a reader, I already knew there was unfinished business between Sofi and the Delonese, as well as her continued search for her brother. What I wasn’t expecting—and what I loved most about this book—was how Sofi’s mother became an active participant within the story. One of the main themes from book 1 was Sofi’s broken relationship with her mother, Inola. This book explored that theme even further and the reader was able to see both sides of their relationship.

Although Miguel remains a love interest for Sofi, I didn’t feel like the romance portion of the story bogged down the plot. It was enough to satisfy the reader but allowed the action and movement of events to continue without feeling stifled. In the same way that we learned more about Inola’s backstory and motives, we are brought to a deeper understanding of what makes Miguel tick, as well. One of my favorite things about Mary Weber’s writing is how she continually takes each character to the next level throughout each story, which helps make the bond between reader and character stronger.

Once again, the theme’s of human trafficking and corruption within government direct the story, making this both relevant and relatable within our modern world. Sofi comes across as a real teenager that has very much the same struggles that many teens have today. Her decisions aren’t always the right ones but each step of her journey teaches her who she is and what she wants to accomplish with her life. This alone should make this book jump to the top of the TBR pile for any teen looking for a solid YA novel.

Reclaiming Shilo Snow is a clean YA sci-fi novel appropriate for teens and adults of all ages.

Mary Weber is the award-winning HarperCollins author of the bestselling young adult Storm Siren Trilogy, and The Evaporation of Sofi Snow series. An avid school and conference speaker, Mary’s passion is helping others find their voice amid a world that often feels too loud. When she’s not plotting adventures involving tough girls who frequently take over the world, Mary sings 80’s hairband songs to her three muggle children, and ogles her husband who looks strikingly like Wolverine. They live in California which is perfect for stalking L.A. bands and the ocean. She gets nerdy at @maryweber.com, FACEBOOK @MaryWeberAuthor, INSTAGRAM @MaryWeberAuthor, and GOODREADS.

CONNECT WITH MARY:  website │ facebook │ twitter │ instagram │ goodreads
SCAVENGER HUNT RULES
1. Be sure to stop at every stop to get the word/phrase as part of the hunt. You should find the phrase within the caption of their social media post or their blog post. Once you get the full phrase, enter it in the Rafflecopter entry form below.
2. The tour landing page (this page) with the tour schedule and the Grand Prize entry form will be posted here and on JustRead Publicity Tour’s Campaign page.
3. Stops will be posted no later than 6 PM EST on February 20, 2018. The Tour-Wide, Grand Prize Giveaway will be opened through 11:59 PM EST on February 24, 2018. Individual stops’ giveaways will be at the discretion of the hosts.
4. Have fun and be sure to check out this series! It’s AWESOME!

All right Scavenger Hunters! Here is your clue for Caffeinated Fiction: can’t

All of a Kind Mom

My So Called Chaos

Ramblings of a Reader

Reading is My SuperPower

The Start of Something New

Thanks for joining the hunt!

(**I received a free ARC from the publisher/publicity group in exchange for an honest review.)