Hey guys! It’s been too long since I’ve done one of these. And to be honest, I’ve read quite a few fantastic books lately. But this one is, by far, the one that stands out in the crowd. If you’re looking for a clean YA sci-fi story, then you’ve come to the right place!

“The Evaporation of Sofi Snow” comes from Mary Weber, an amazing YA author with books published through Thomas Nelson/Harper Collins. You might know her from her “Storm Siren Trilogy,” which are equally as highly recommended, although with a very different plot line than this. (I love Mary’s diversity of stories she creates!) This book is the first in a two-book series, the final book–“Reclaiming Shilo Snow”–landing in bookstores on March 6.

Ever since the Delonese ice-planet arrived eleven years ago, Sofi’s dreams have been vivid. Alien. In a system where Earth’s corporations rule in place of governments and the humanoid race orbiting the moon are allies, her only constant has been her younger brother, Shilo. As an online gamer, Sofi battles behind the scenes of Earth’s Fantasy Fighting arena where Shilo is forced to compete in a mix of real and virtual blood sport. But when a bomb takes out a quarter of the arena, Sofi’s the only one who believes Shilo survived. She has dreams of him. And she’s convinced he’s been taken to the ice-planet.

Except no one but ambassadors are allowed there.

For Miguel, Earth’s charming young playboy, the games are of a different sort. As Ambassador to the Delonese, his career has been built on trading secrets and seduction. Until the Fantasy Fight’s bomb goes off. Now the tables have turned and he’s a target for blackmail. The game is simple: Help the blackmailers, or lose more than anyone can fathom, or Earth can afford. 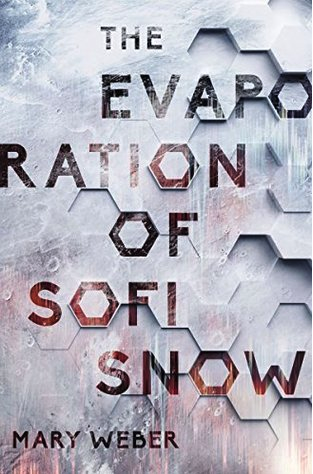 As I’ve said in the past, I only review 5 star books, so this rating shouldn’t come as a surprise. The thing that caught me off guard with this book is just how addictive it is! This is that book. The one that you think about during the day when you aren’t able to read, the one that you continue to think about days (read: weeks!) after finishing it. The one where you count down the days until the release of the next book!

Sofi Snow begins with a little bit of a Hunger Games feel, in that there are a group of teens competing inside an arena. However, the comparison stops there. This is not a book about kids killing kids and the game aspect of the story–although very much a part of the plot–ends soon after the first few chapters. The twist that I LOVED about this book is that the game the teens are playing is literally a video game with real people inside. Sofi is part of a team of hackers that manipulate their end of the game to aid their own player while blocking the others, and vice versa from the other teams. I found this part of the book intriguing and fun!

What happens next sets the thread for the rest of the book–a bomb is set off within the game and her brother, Shilo, disappears from sight. Sofi is convinced he’s still alive. Along with the help of an old flame, Miguel, and a few other companions, Sofi goes on a hunt to locate and save her brother. The underlying force of the whole book is that years prior, earth was invaded by an alien race called the Delonese. She and Miguel find themselves caught in a game of cat and mouse as they traverse unsteady waters of politics between the Delonese and earth’s government. Who can they trust and what secrets will they uncover?

The Romance: I found the romance between Miguel and Sofi very balanced. We know they had something in the past and putting them together under such duress is sure to bring old feelings back again. But I didn’t feel it was overkill. Mary Weber gave us just enough romance to keep the story going and to leave the reader wishing the two would get together for good! *swoon* Romance was not the driving plot here, so if you’re not a big romance fan, this book is still for you!

The Tech: I’m married to an IT guy, so I know a few things. And this book made me geek out! *blush* It was so much fun to read about the live action video game and to catch all the techie stuff throughout the book as Sofi hacks into systems and manipulates things to aid in their quest. The tech end of this story is right on.

The Politics: Normally I don’t love political driven stories. Books that have that political corruption angle going but don’t focus dead on, are what I prefer to read. And Sofi Snow was right up my alley! I loved the delicate dance Mary Weber showed between the Delonese and humans but again, this wasn’t overkill. Yes, the main point of the story was corruption within “the system” but Weber focused so well on character and relationship that I wasn’t burdened with too much political mumbo-jumbo.

The Heart: In an effort not to spoil the whole thing for you, I won’t go into detail about the “heart” of the book. But you will know what it is once you get to it. I appreciate Mary Weber taking the time to approach such a delicate subject, a theme that affects all of us, even in the year 2018. Mary makes this more about just a novel that entertains, but takes a stand against a true corruption against humanity that we face within our country every single day. Thank you, Mary, for approaching this subject and not sugar coating literature for young adults just because it makes some people feel uncomfortable. These are real conversations we need to be having, especially in our country, and what a unique way for young people to be able to talk about it than through a great novel!

That is all for my review. If you haven’t guessed, I love, love, loved this book! Yes, I’m salivating for the next installment. Once again, this book is CLEAN YA, so conservative parents, feel good about letting your young person read it. Although not published as Christian fiction, Mary is a Christian, so strong faith themes stand out within the novel without having to the hit the reader over the head. Well done, Mary!