Hey guys! I’m so excited to finally get to talk about a book I’ve been meaning to review for a while! You may remember my five star reviews for Jamie Foley’s previous books, Sentinel and  Arbiter, or maybe you even caught my interview with her last April. So I was super excited to see she released a short story Prequel to the Sentinel Trilogy in November, entitled Viper. Read on to find out what I thought! 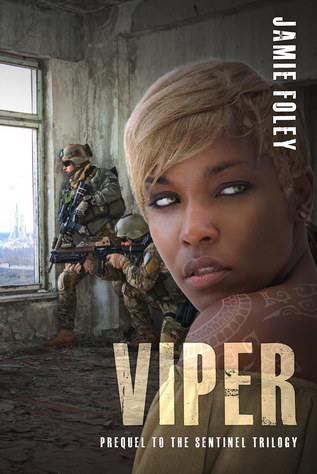 Sorvashti is a captive. Jet is a soldier. Both harness the primal power of aether.

The war is over, but the Revoth want their land back. Kidnapping, ransom, and slavery fund their terrorism, but bombing Jet’s hometown was the final straw.

Viper Unit is dispatched to take the Revoth down. But the special forces have no need for a mind-reading ‘fairy’—unless Jet can prove himself as a sniper.

Sorvashti’s clan demands she take one of the seven oaths, but her father’s political status has already chosen for her—and made her a prime target for ransom.

When Jet and Sorvashti meet behind enemy lines, revenge intertwines with survival… and a spark between them neither can ignore.

True to her style, Jamie Foley’s writing is captivating–in both technique and plot! Once again we are pulled into a world ruled by Aethryn as we travel through the fantasy lands Valinor, Illyria and Kioa. Familiar characters Jet and Sorvashti return–or in this case, appear for the first time, since this is actually a prequel to the other stories. We learn about their background and struggles they experienced that laid the path for future decisions made in the following novels.

Personally, Jet is my favorite character of the series, so it was with great joy that I found him at the center of the story! It was great to experience things from his perspective–and maybe before a little of his sarcastic negativity had settled in. And Sorvashti’s strength and wisdom is awesome to see alongside the normally dominant male lead. Way to go Sorv!

Overall, this story was fantastic and compliments the remaining series perfectly. Definitely check out Sentinel if you haven’t had the chance yet!

Have you already read the series? What are your thoughts? I’d love to hear what you think in the comments below!